How Do Crane Buildings Work?

Find me on:
LinkedIn

We tend to take for granted the great things that surround us every day.

From the supercomputer that fit in our pockets, to self-driving cars, we are spoiled with luxuries previous generations only dreamed of.

If you live in a big city, another thing you likely take for granted is skyscrapers.

These massive buildings were once things of science fiction, but now we don't even think twice about the monumentally-sized machine that shapes our world.

From the ground looking up, it might be hard to imagine how the crane accomplishes what it does without tipping over smashing into something.

How are these cranes constructed? How do they lift concrete, steel beams, and various other building materials from the ground to hundreds of stories above the earth?

There's a lot that goes into it, including some unbelievable physics and machinery.

In the article below, we will examine exactly how crane buildings work, and how they build the world around us.

Tower cranes are made up of several essential parts.

To get started, a large, hefty concrete pad has to be laid where the base will be.

The actual base of the crane is then secured onto the concrete support pad with larger than life bolts.

The concrete pad is a critical component for tower crane construction and stability.

The pad is poured weeks in advance, and for large cranes, the pad is right around 30' by 30' and four feet deep.

The tower that stretches high into the air, as much as 265 feet or more, is called the mast, similar to the mast of a ship.

The long arm that extends out from the crane is called the jib, which also has its roots in nautical terminology, as the jib is the sail that connects from the bow to the mainmast at the top.

The shorter arm opposite the jib is called the machinery arm.

The machinery arm contains the massive concrete counterweights that allow for balance when extending out heavy loads along the jib.

And, finally, the most important part of all is the operator's cab at the top.

The operator's cab is where the crane professional choreographs the delicate dance of moving construction materials high into the air.

What Can A Tower Crane Handle?

When a tower crane is anchored to the ground, it can't be much more than 265 feet tall.

If they are secured to a building, as the building rises, the tower crane can be much taller.

The longest the job can be is right around 230 feet, and the jib can lift about 19.8 tons.

Because they can't defy physics just yet, tower cranes can't extend a maximum weight load to the very end of a 250-foot jib.

Every crane comes equipped with a limit switches which will prevent the crane from being overloaded.

One of the switches monitors the load to make sure it doesn't exceed the 18-metric ton limit, and a second switch makes sure the load, depending on its weight, doesn't extend out too far on the jib.

The closer the weight gets to the 18-metric ton maximum, the shorter the distance it can extend along the jib.

How Are Tower Cranes Constructed?

There are usually 10 to 12 semi-trucks used to haul in all of the components for a tower crane.

Mobile cranes are used to assemble the job, including the slewing units and counterweights on the machinery arm.

Growing the crane from the base up is a complicated procedure.

To complete the procedure, a climber is used. A climber lifts the topmost part of the crane with the jib, slewing unit, and machinery arm enough for a section of the mast's latticework to slide in.

That is done with the jib by the tower crane itself.

Once the lattice is in place, it's secured, and the process with the climber is repeated.

That process alone can take over a week depending on how tall you need the crane to be. 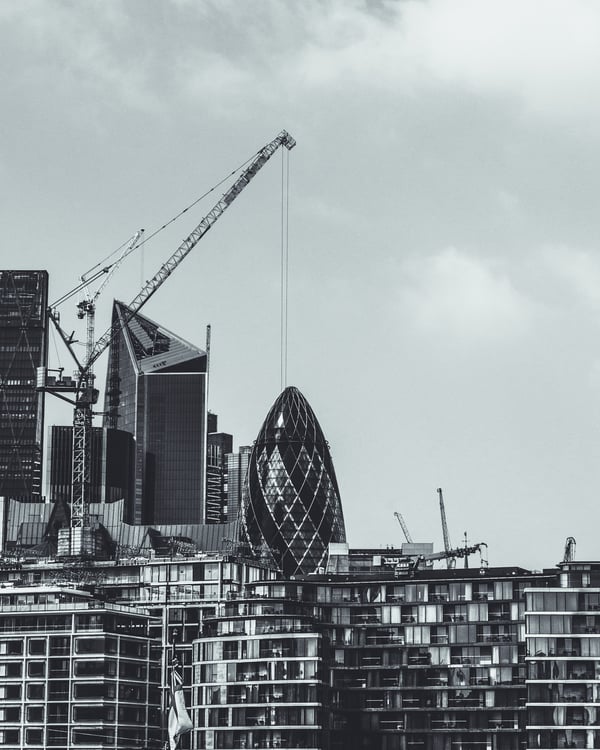 The Low Down on Tower Cranes

After that quick rundown on how tower cranes work, you should have a deeper appreciation for the massive buildings that crowd the big city skylines.

It wasn't too long ago that building up wasn't an option, you could only build out.

But, because of the capabilities of tower cranes, the sky is literally the limit.

If you enjoyed this article, you should give these a read:

The Original Article Is Here